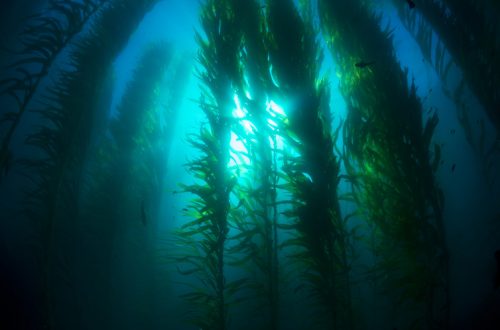 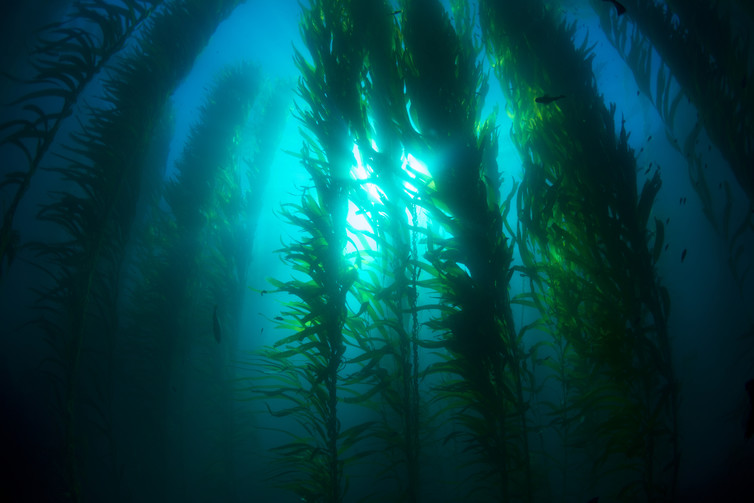 Solar energy has, until now, been limited to supplying power only when the sun is shining. But new technology using concentrated sunlight to provide intense heat energy that can be effectively stored overcomes this problem, providing clean renewable power around the clock

This is an edited extract from Sunlight and Seaweed: An Argument for How to Feed, Power and Clean Up the World by Tim Flannery, published by Text Publishing.

Bren Smith, an ex-industrial trawler man, operates a farm in Long Island Sound, near New Haven, Connecticut. Fish are not the focus of his new enterprise, but rather kelp and high-value shellfish. The seaweed and mussels grow on floating ropes, from which hang baskets filled with scallops and oysters. The technology allows for the production of about 40 tonnes of kelp and a million bivalves per hectare per year.

The kelp draw in so much carbon dioxide that they help de-acidify the water, providing an ideal environment for shell growth. The CO₂ is taken out of the water in much the same way that a land plant takes CO₂ out of the air. But because CO₂ has an acidifying effect on seawater, as the kelp absorb the CO₂ the water becomes less acid. And the kelp itself has some value as a feedstock in agriculture and various industrial purposes.

After starting his farm in 2011, Smith lost 90% of his crop twice – when the region was hit by hurricanes Irene and Sandy – but he persisted, and now runs a profitable business.

His team at 3D Ocean Farming believe so strongly in the environmental and economic benefits of their model that, in order to help others establish similar operations, they have established a not-for-profit called Green Wave. Green Wave’s vision is to create clusters of kelp-and-shellfish farms utilising the entire water column, which are strategically located near seafood transporting or consumption hubs.

The general concepts embodied by 3D Ocean Farming have long been practised in China, where over 500 square kilometres of seaweed farms exist in the Yellow Sea. The seaweed farms buffer the ocean’s growing acidity and provide ideal conditions for the cultivation of a variety of shellfish. Despite the huge expansion in aquaculture, and the experiences gained in the United States and China of integrating kelp into sustainable marine farms, this farming methodology is still at an early stage of development.

Yet it seems inevitable that a new generation of ocean farming will build on the experiences gained in these enterprises to develop a method of aquaculture with the potential not only to feed humanity, but to play a large role in solving one of our most dire issues – climate change.

Globally, around 12 million tonnes of seaweed is grown and harvested annually, about three-quarters of which comes from China. The current market value of the global crop is between US$5 billion and US$5.6 billion, of which US$5 billion comes from sale for human consumption. Production, however, is expanding very rapidly.

Seaweeds can grow very fast – at rates more than 30 times those of land-based plants. Because they de-acidify seawater, making it easier for anything with a shell to grow, they are also the key to shellfish production. And by drawing CO₂
out of the ocean waters (thereby allowing the oceans to absorb more CO₂ from the atmosphere) they help fight climate change.

The stupendous potential of seaweed farming as a tool to combat climate change was outlined in 2012 by the University of the South Pacific’s Dr Antoine De Ramon N’Yeurt and his team. Their analysis reveals that if 9% of the ocean were to be covered in seaweed farms, the farmed seaweed could produce 12 gigatonnes per year of biodigested methane which could be burned as a substitute for natural gas. The seaweed growth involved would capture 19 gigatonnes of CO₂. A further 34 gigatonnes per year of CO₂ could be taken from the atmosphere if the methane is burned to generate electricity and the CO₂ generated captured and stored. This, they say:

…could produce sufficient biomethane to replace all of today’s needs in fossil-fuel energy, while removing 53 billion tonnes of CO₂ per year from
the atmosphere… This amount of biomass could also increase sustainable fish production to potentially provide 200 kilograms per year, per person, for 10 billion people. Additional benefits are reduction in ocean acidification and increased ocean primary productivity and biodiversity.

Nine per cent of the world’s oceans is not a small area. It is equivalent to about four and a half times the area of Australia. But even at smaller scales,
kelp farming has the potential to substantially lower atmospheric CO₂, and this realisation has had an energising impact on the research and commercial
development of sustainable aquaculture. But kelp farming is not solely about reducing CO₂. In fact, it is being driven, from a commercial perspective, by sustainable production of high-quality protein.

What might a kelp farming facility of the future look like? Dr Brian von Hertzen of the Climate Foundation has outlined one vision: a frame structure, most likely composed of a carbon polymer, up to a square kilometre in extent and sunk far enough below the surface (about 25 metres) to avoid being a shipping hazard. Planted with kelp, the frame would be interspersed with containers for shellfish and other kinds of fish as well. There would be no netting, but a kind of free-range aquaculture based on providing habitat to keep fish on location. Robotic removal of encrusting organisms would probably also be part of the facility. The marine permaculture would be designed to clip the bottom of the waves during heavy seas. Below it, a pipe reaching down to 200–500 metres would bring cool, nutrient-rich water to the frame, where it would be reticulated over the growing kelp.

Von Herzen’s objective is to create what he calls “permaculture arrays” – marine permaculture at a scale that will have an impact on the climate by growing kelp and bringing cooler ocean water to the surface. His vision also entails providing habitat for fish, generating food, feedstocks for animals, fertiliser and biofuels. He also hopes to help exploited fish populations rebound and to create jobs. “Given the transformative effect that marine permaculture can have on the ocean, there is much reason for hope that permaculture arrays can play a major part in globally balancing carbon,” he says.

The addition of a floating platform supporting solar panels, facilities such as accommodation (if the farms are not fully automated), refrigeration and processing equipment tethered to the floating framework would enhance the efficiency and viability of the permaculture arrays, as well as a dock for ships
carrying produce to market.

Given its phenomenal growth rate, the kelp could be cut on a 90-day rotation basis. It’s possible that the only processing required would be the cutting of the kelp from the buoyancy devices and the disposal of the fronds overboard to sink. Once in the ocean depths, the carbon the kelp contains is essentially out of circulation and cannot return to the atmosphere.

The deep waters of the central Pacific are exceptionally still. A friend who explores mid-ocean ridges in a submersible once told me about filleting a fish for dinner, then discovering the filleted remains the next morning, four kilometres down and directly below his ship. So it’s likely that the seaweed fronds would sink, at least initially, though gases from decomposition may later cause some to rise if they are not consumed quickly. Alternatively, the seaweed
could be converted to biochar to produce energy and the char pelletised and discarded overboard. Char, having a mineralised carbon structure, is likely to last well on the seafloor. Likewise, shells and any encrusting organisms could be sunk as a carbon store.

Once at the bottom of the sea three or more kilometres below, it’s likely that raw kelp, and possibly even to some extent biochar, would be utilised as a food source by bottom-dwelling bacteria and larger organisms such as sea cucumbers. Provided that the decomposing material did not float, this would not matter, because once sunk below about one kilometre from the surface, the carbon in these materials would effectively be removed from the atmosphere for at least 1,000 years. If present in large volumes, however, decomposing matter may reduce oxygen levels in the surrounding seawater.

Submarine canyons may also convey large volumes at a more regular rate to the deep ocean floor. The Carmel Canyon, off California, for example, exports large volumes of giant kelp to the ocean depths, and 660 major submarine canyons have been documented worldwide, suggesting that canyons play a significant role in marine carbon transport.

These natural instances of large-scale sequestration of kelp in the deep ocean offer splendid opportunities to investigate the fate of kelp, and the carbon it contains, in the ocean. They should prepare us well in anticipating any negative or indeed positive impacts on the ocean deep of offshore kelp farming.

Only entrepreneurs with vision and deep pockets could make such mid-ocean kelp farming a reality. But of course where there are great rewards, there are also considerable risks. One obstacle potential entrepreneurs need not fear, however, is bureaucratic red tape, for much of the mid-oceans remain a global commons. If a global carbon price is ever introduced, the exercise of disposing of the carbon captured by the kelp would transform that part of the business from a small cost to a profit generator. Even without a carbon price, the opportunity to supply huge volumes of high-quality seafood at the same time as making a substantial impact on the climate crisis are considerable incentives for investment in seaweed farming. 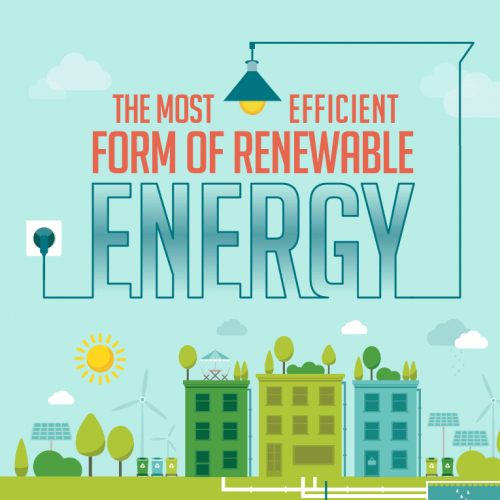 What Are The Most Efficient Forms of Renewable Energy

Today marks the second annual Professional Engineers Day in the USA; to celebrate we take a look at...

via The Conversation. Read the original article.

The Isle of Man has revealed a new 'action plan' to tackle the worlds climate crisis by generating 75% of...