Meet the Robotic Arm you can control with your mind.

Home » News » Health » Meet the Robotic Arm you can control with your mind. 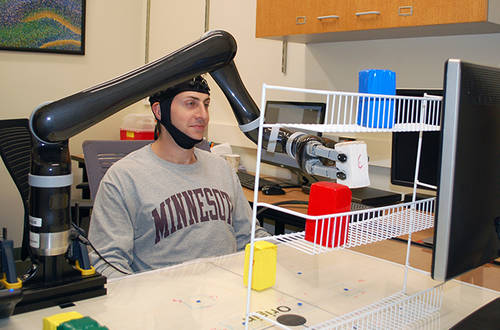 A team from the University of Minnesota have unveiled a Robotic Arm, which can reach and grasp real world objects, that you can be control using only your thoughts.

Unlike similar projects, the new system requires no brain implant to operate. Patients are able to control it just by imagining moving their arms.

The system could potentially prove life-changing for those with paralysis or neurodegenerative diseases.

University of Minnesota biomedical engineering professor and lead researcher on the study, Bin He explained that “this is exciting as all subjects accomplished the tasks using a completely non-invasive technique [..] we see a big potential for this research to help people who are paralysed or have neurodegenerative diseases to become more independent without a need for surgical implants”

The team used an electroencephalography (EEG) based brain-computer interface to record the electrical activity of the subjects’ brain through a specialised cap.

The cap was fitted with 64 electrodes and is able to convert the subject’s thoughts into commands the robot can understand by using an advanced signal processing and machine learning algorithm.

To date over 80 healthy human subjects have successfully completed experimental sessions with the device.

Initially, they were tasked with moving a virtual cursor around a computer screen. Only once they had completed several sessions were they able to successfully learn how to control the robotic arm.

Eventually, the subjects were able to reach to randomised positions on a table using the arm, and actually to move objects from the table onto a shelf with a 70% success rate.

The robotic arm has built on research published three years ago which allowed subjects able to fly a small quadcopter using similar non-invasive EEG technology (above).

“Three years ago, we weren’t sure moving a more complex robotic arm to grasp and move objects using this brain-computer interface technology could even be achieved,” Bin He said. “We’re happily surprised that it worked with a high success rate and in a group of people.”

The team unveiled their progress in their paper “Noninvasive Electroencephalogram Based Control of a Robotic Arm for Reach and Grasp Tasks“. 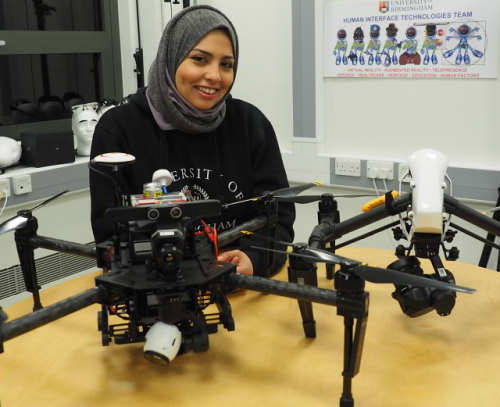 Birmingham University Is Stepping Up to Tackle the Engineering Gap

Last month the BBC highlighted the engineering gap; pointing out the shocking fact that women make up only...