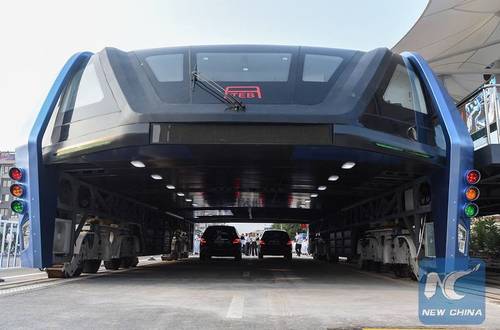 Engineers in Qinhuangdao City have finally completed a moving full-scale mock-up of China’s large straddling bus idea, which will allow cars to drive underneath it.

What happened to China’s Traffic-Straddling Bus?

This article was originally published in 2016 amongst a flurry of press attention for the retro-sci-fi scheme.
In 2017 it was revealed that just days after the launch the bus was abandoned in the middle of a Hebei city. Eventually, the remains of the bus had to be moved by police and its tracks dug out and removed.
Later that year it was revealed that the company behind TEB was illegally raising money through an online portal. The whole project looks to have been a scam.
Read more about what happened at ‘China’s Traffic-Straddling Bus – One Year On‘.

The Transit Elevated Bus (TEB) prototype is 22-metres long, 7.8-metres wide, and 4.8-metres tall, can pack in up to 300 passengers, and allow cars less than 2-metres (6.6-feet) to drive underneath.

It isn’t that often concepts which look like they have come straight out of an old 1950s Popular Mechanics are created. China’s traffic-straddling bus looks to be one of those concepts that will be made into an everyday reality on the streets of Qinhuangdao.

Is this a new concept? 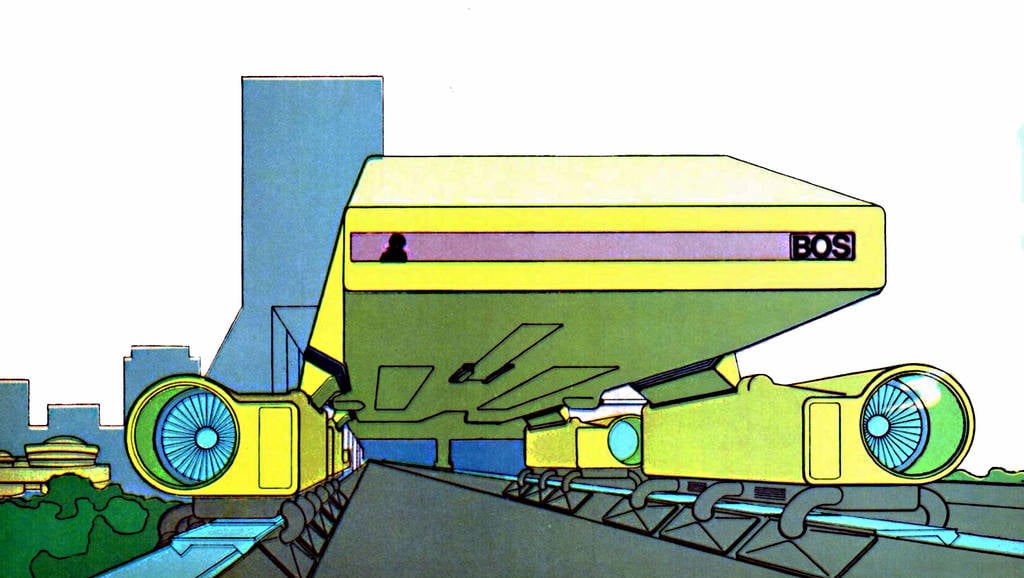 The idea of a traffic straddling bus has been around for a long time. The BosWash Landliner was proposed in the New York Magazine in Feb 1969. It was designed to travel over 200mph on air-bearing rails across the BosWash area. 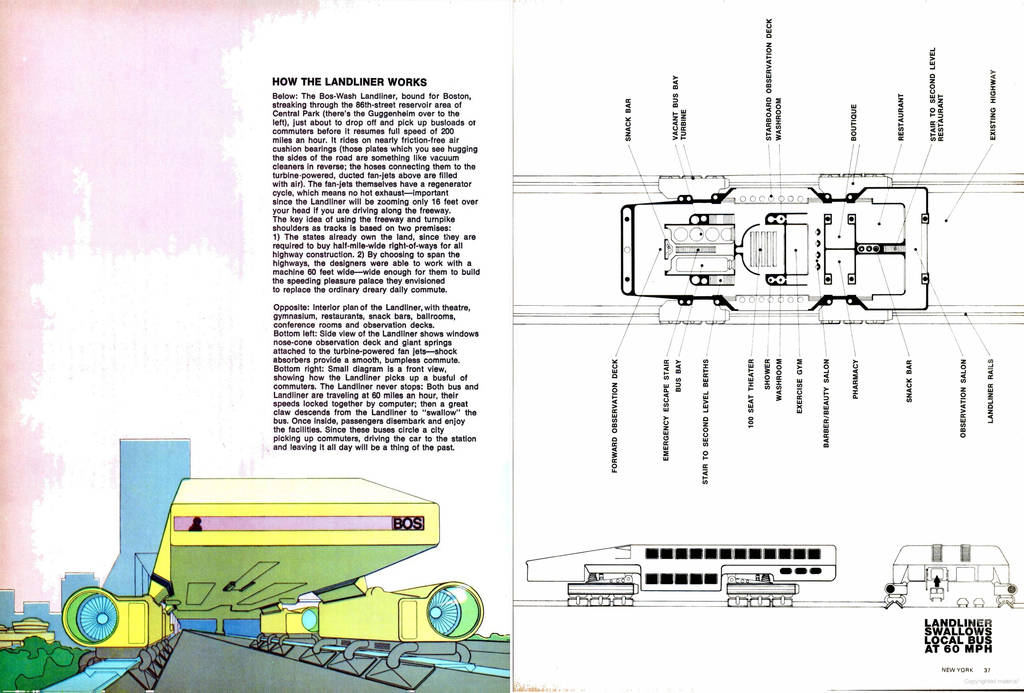 What is China’s version called?

Officially the bus is called the TEB (tee-ee-bee), short for’Transit Elevated Bus’.
However, in Chinese, the bus is 巴铁 (Bā Tiě), which can translate as “Iron Bar” (or less excitingly “Rail Bus”).

How long ago was this version proposed? 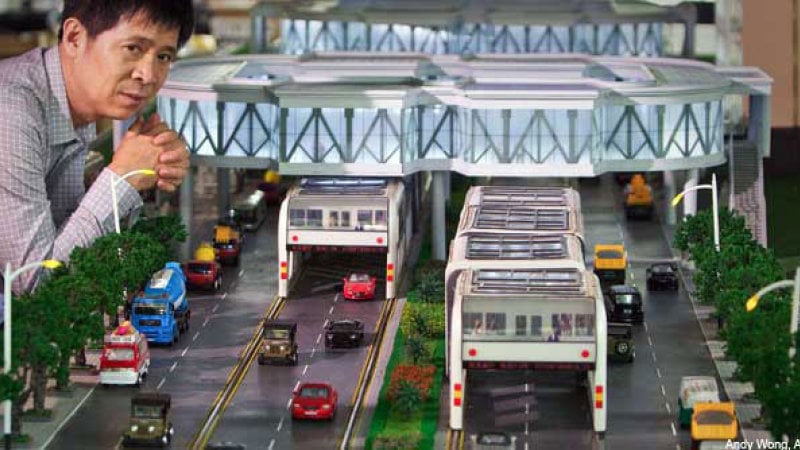 Early renderings from 2010 show a more streamlined looking bus. It would have had no articulated segments and have been tall enough to drive larger cars like SUVs and Jeeps.

A second prototype was proposed in 2012 which is closer to the bus-train system the working prototype now employs. It would have had bending sections to allow it pass around street corners.

How much does it cost?

Initial estimates from 2012 suggest the budget for the project to be around 500 million yuan ($75 million). While this might sound expensive, but the TEB aims to reduce traffic congestion by around 20-30% without cities having to build expensive transport infrastructure; such as subways systems, monorails or bridges. The estimated cost of the scheme is 10% less of that of creating an equivalent subway system.

It is a comparatively inexpensive way to add a second story of bus travel to roads that already exist.

The bus’s designed, Youzhou Song, hopes the TEB could replace up to 40 conventional buses. This could save 860 tonnes of fuel and avoid 2,640 tonnes of carbon emissions each year as well as reducing traffic on China’s congested roads.

How does it work?

The TEB uses a system of hub-mounted motors for propulsion. In Engineering terms this makes a lot of sense as it allows the drive train to be highly modular; allowing for easy to swap and service components, layers of redundancy and eliminating the need to an independent steering mechanism.

Wheel motors can be individually sped up or slowed down to allow for the same type of skid steering used on tanks or rovers. The system would similar to how Mars’s Curiosity moves, as it uses a smaller scale system of wheel hub motors.

TEB looks to have utilised an unusual braking system because of it wheel hub motor drive. As the inside of the wheels are already filled with an electric motor a traditional brake system would not work. TEBs solution is to connect a standard disc brake assembly via a belt to the wheels vertically. Additional wheels with brakes can also be deployed as an emergency brake. 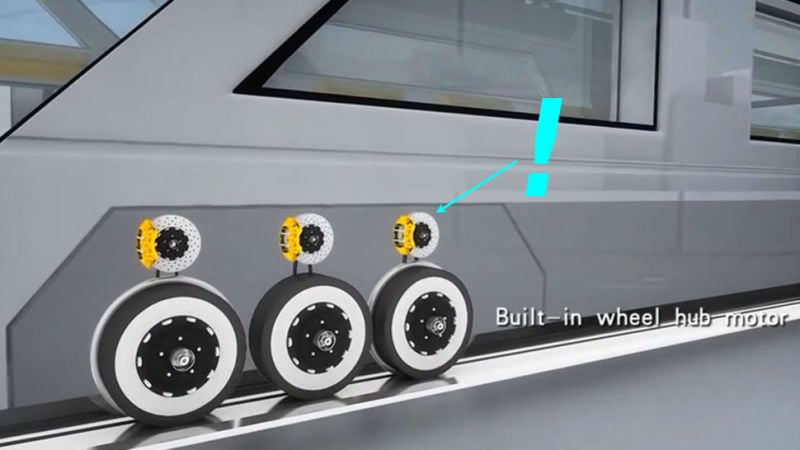 Pictures of the internals of the prototype have yet to be released so details of the exact assembly are yet to be confirmed.

How is it powered?

The TEB is a completely electric vehicle. The main engineering challenge would normally the size of the batteries required to give it a usable range. However, because the TEB will only be travelling short distances between station is has been designed to work off a system of “direct relay charging systems”.

This means that each station will have a conductor arm that will drag along the roof of the TEB and connect to a pair of rails, providing power to the bus as it moves through the station. 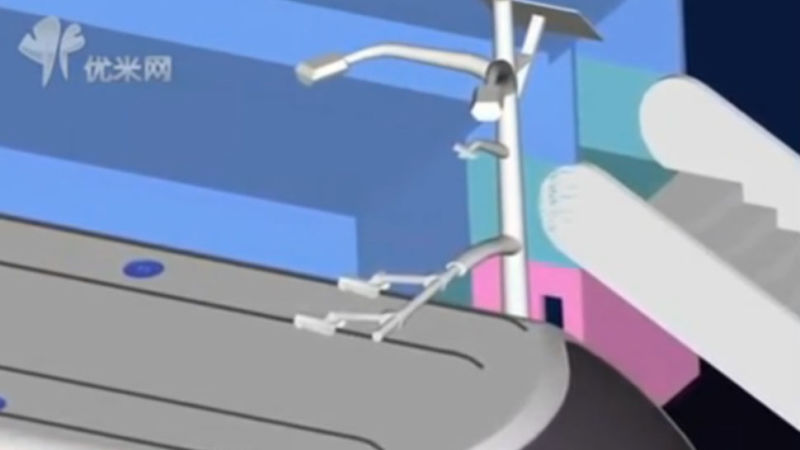 As the TEB is only at a prototype phase other solutions for powering it are being explored. These include solar power or electrifying portions of track that TEB could run on between conventional roads.

While the initial design looked to require a track, it would seem improvements in battery technology since 2010 have minimised the reliance of the TEB on a constant power source.

What about normal traffic?

The size of the TEB means its designers have had to adapt its design to help other traffic on the road. 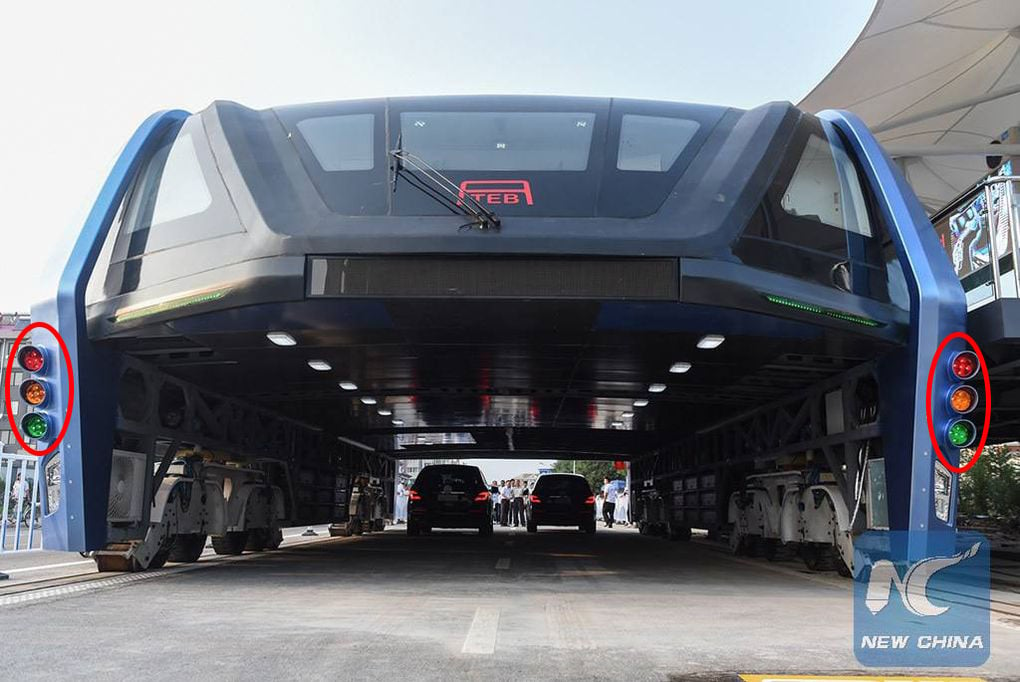 Additionally, a large-text display in the centre of the bus allows it to communicate with traffic behind it. The front and back of the TEB are identical in terms of lighting and the LED Matrix sign which suggests it will be able to run in either direction.

The TEB also employs a hollow design for traffic passing underneath it. Large open windows show the landscape on either side of the bus and animated light displays are designed to simulate stationary objects to prevent drives underneath becoming disorientated by the illusion of moving backwards. 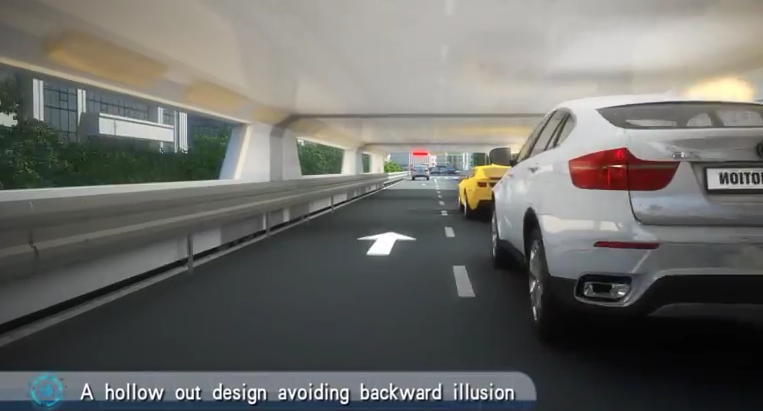 When will it launch 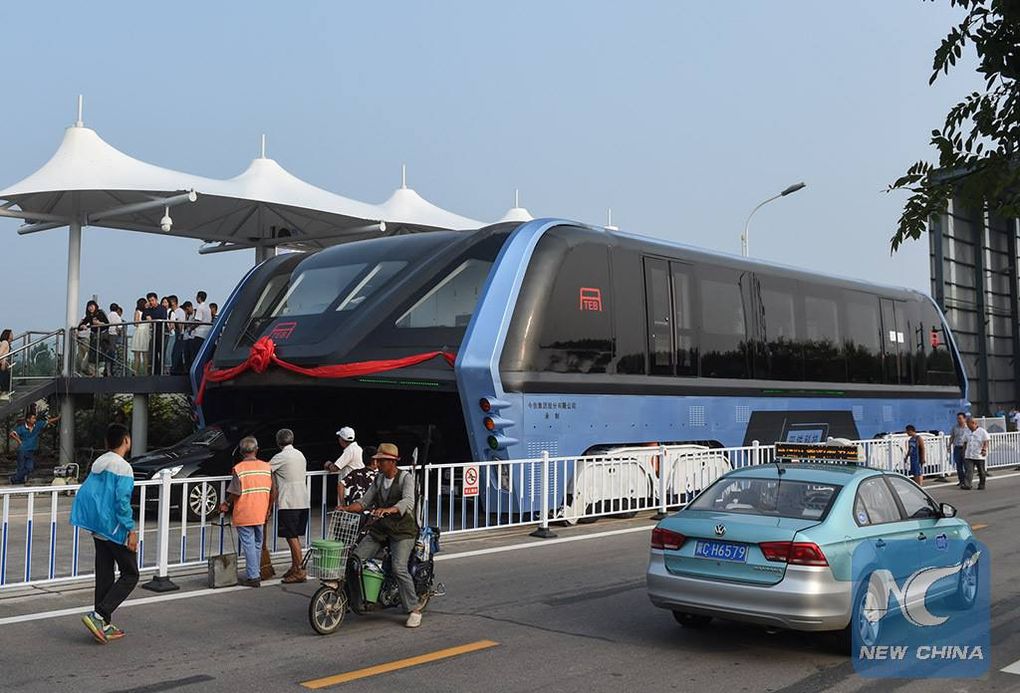 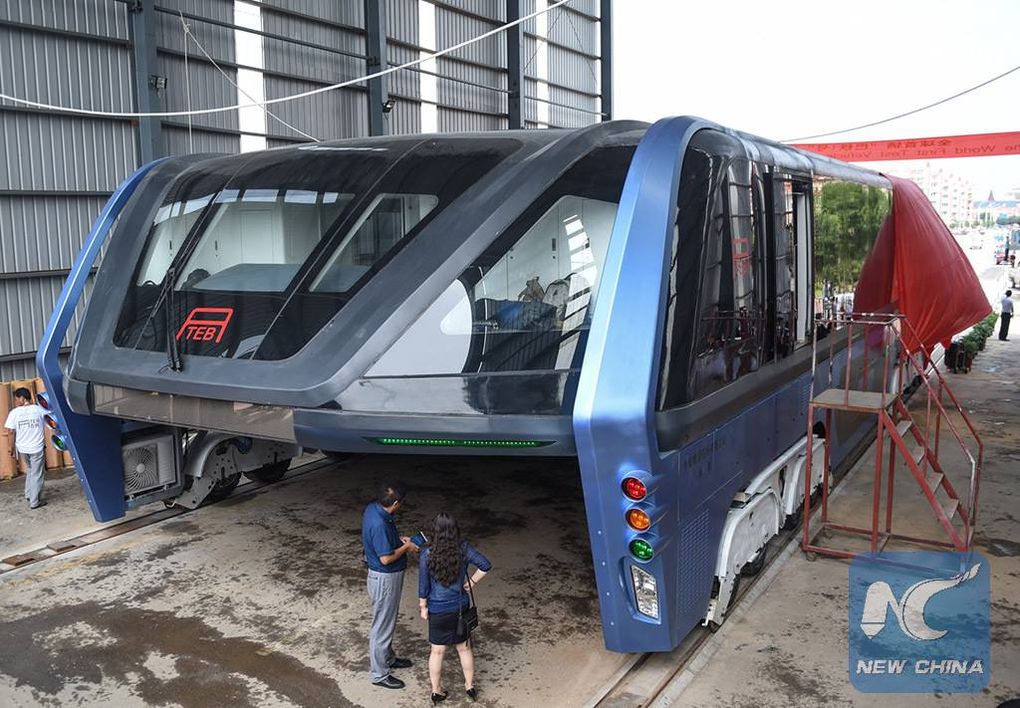 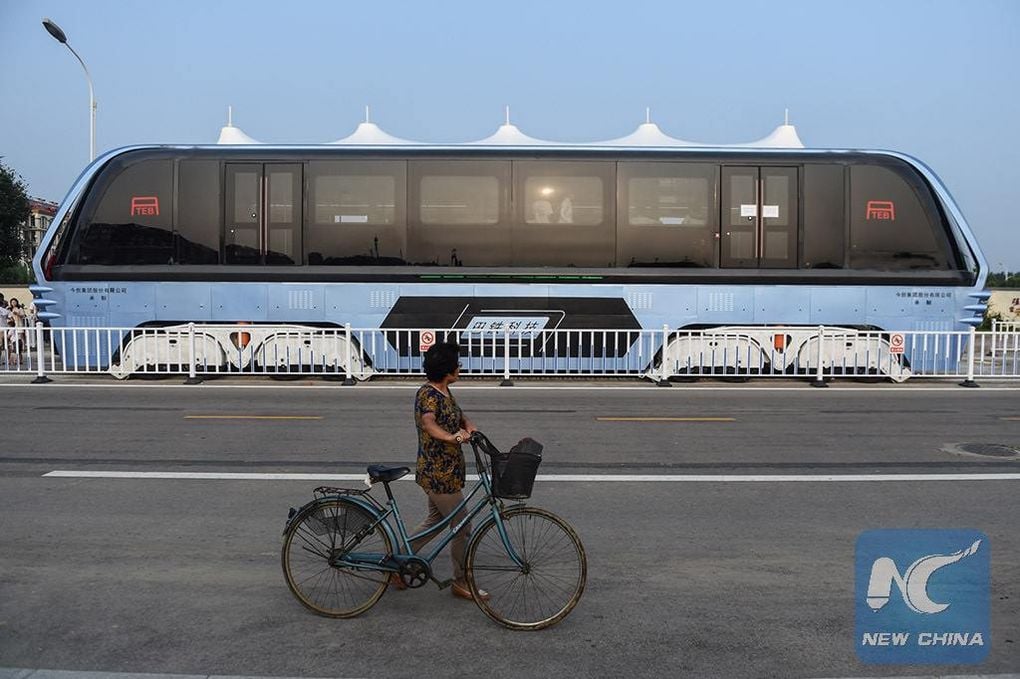 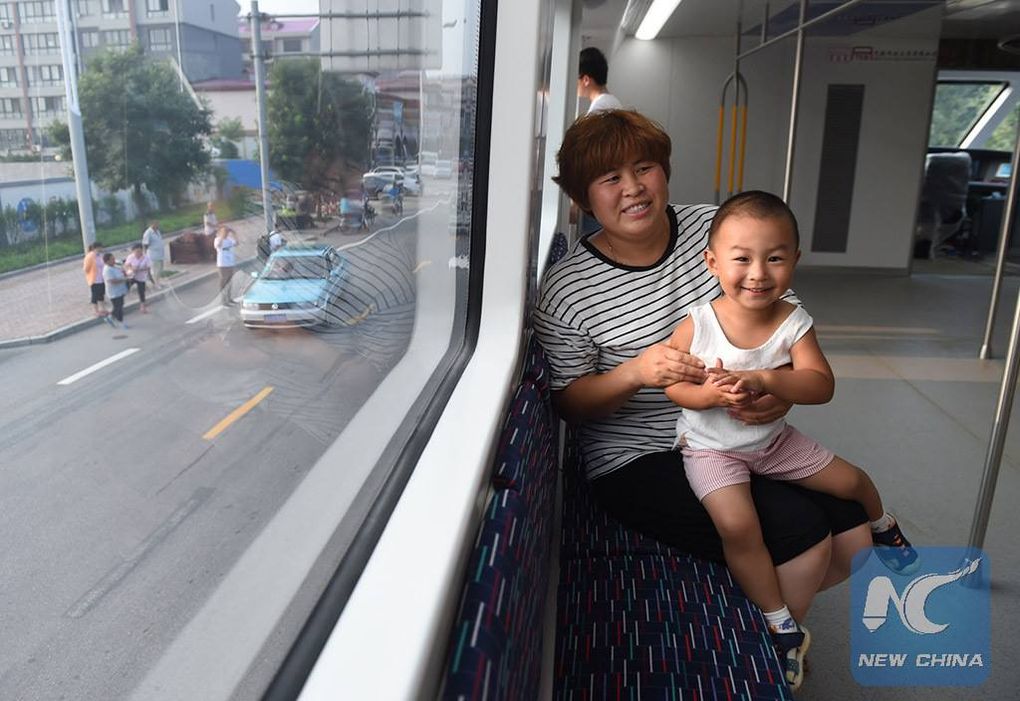 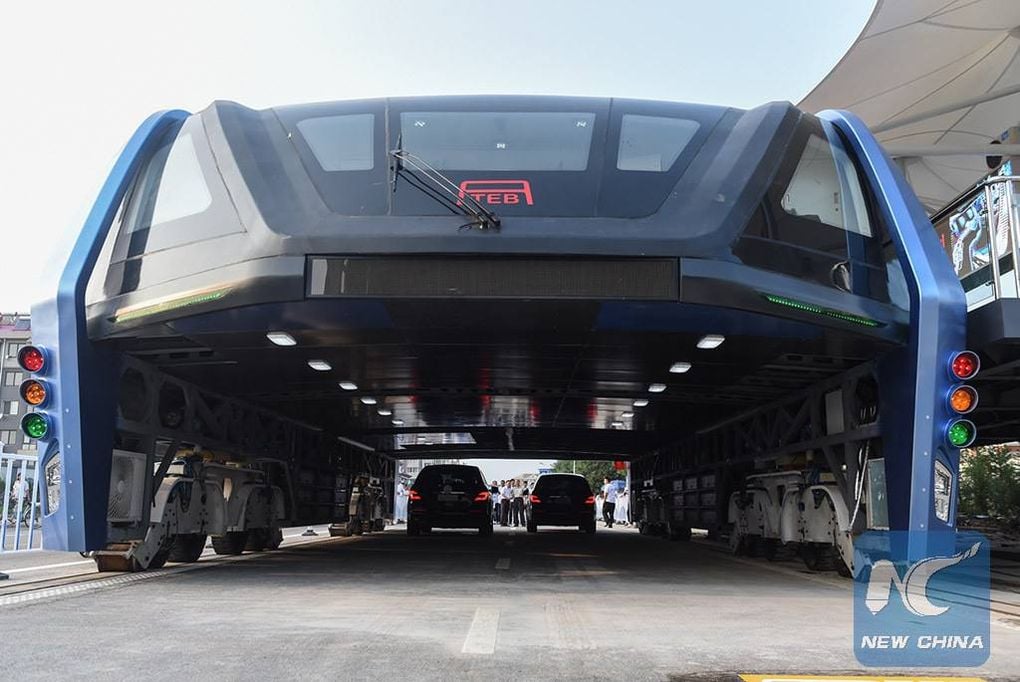 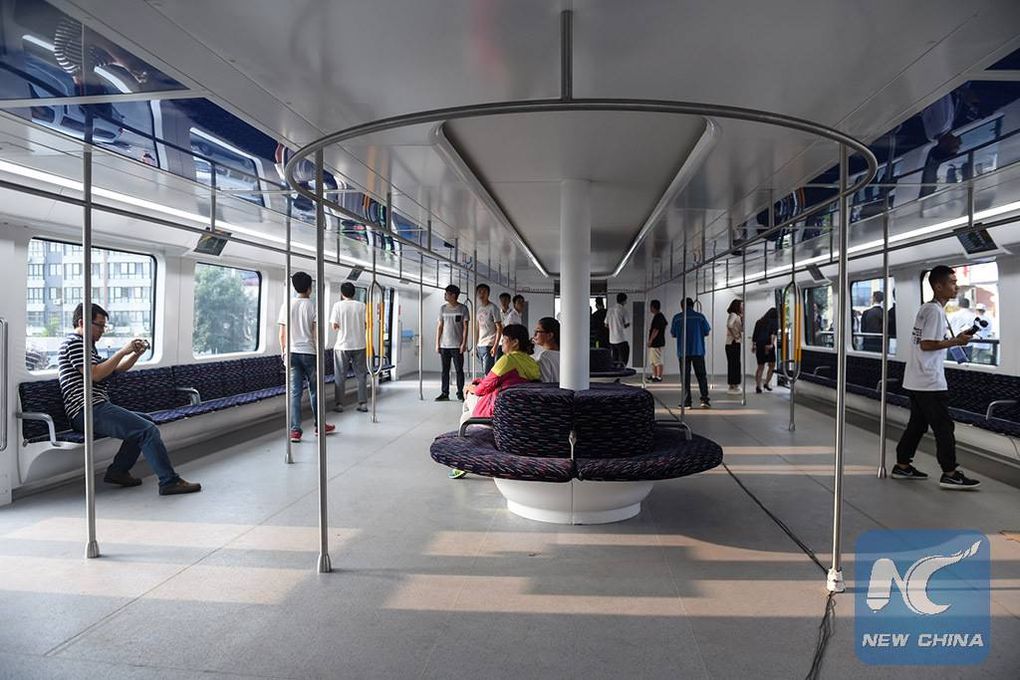 No date has yet been set for a completed TEB system. While Qinhuangdao is currently hosting the prototype, 115 miles of track was set for construction in the Mentougou District of Beijing for late 2010, and both Shijiazhuang, in Hebei Province, and Wuhu, in Anhui Province, are applying for financing for the system. 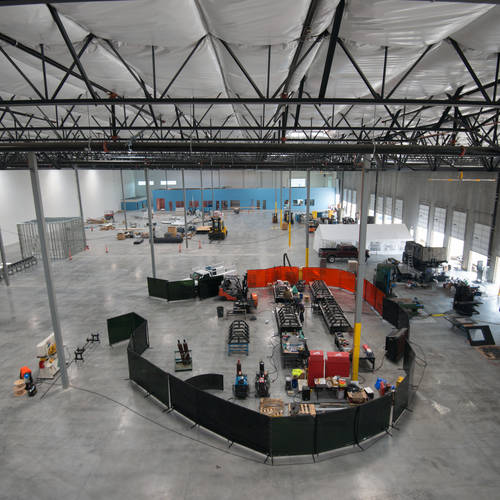 Hyperloop One has opened its first manufacturing plant, taking a step forward in its goal of helping to...