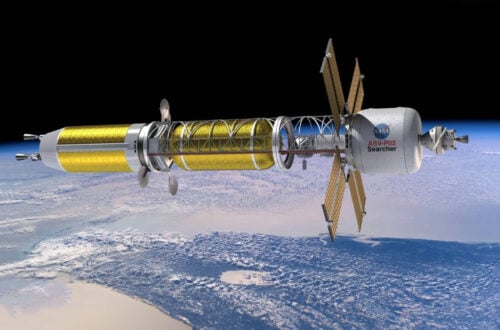 The proposal is spearheaded by Professor Ryan Gosse of the University of Florida. His concept for a new bimodal Nuclear Thermal and Nuclear Electric Propulsion concept could drastically reduce travel time between Earth and Mars to 45 days – making outer-space exploration faster than ever before! It also increases safety for human travelers on missions beyond our planet.

This cutting-edge tech holds great promise; if it works as planned we can look forward to an exciting future with realistic opportunities to see further deep into space.

What is Nuclear thermal propulsion

Nuclear Thermal Propulsion (NTP) is a cutting-edge technology that has the potential to revolutionize space travel as we know it. Essentially, NTP uses a nuclear reactor to heat a propellant, such as liquid hydrogen, to extremely high temperatures. This hot propellant is then expelled out of a nozzle, creating thrust that propels a spacecraft forward.

Concept of a spacecraft enabled by nuclear thermal propulsion.

One of the biggest advantages of NTP over traditional chemical propulsion systems is its much higher specific impulse, or thrust per unit of propellant. This means that spacecraft powered by NTP can travel much faster and farther than those powered by chemical propulsion alone. Additionally, NTP systems can be scaled up or down depending on the needs of the mission, making them incredibly versatile.

Another major advantage of NTP is that it could potentially be used for long-duration missions, such as a manned mission to Mars. This is because NTP systems can operate for much longer periods of time than chemical propulsion systems, which are typically limited by the amount of propellant they can carry.

Despite the many benefits of NTP, it is still a relatively new technology and much work remains to be done before it can be used in actual spacecraft. However, the potential benefits of NTP are so great that engineers and scientists around the world are working tirelessly to develop this technology and bring it to fruition.

In conclusion, Nuclear Thermal Propulsion is a promising technology that has the potential to change the way we explore space. With the dedication and hard work of engineers, we can make this technology a reality, and open up new possibilities for humanity’s future in space.

The ‘Bimodal NTP/NEP with a Wave Rotor Topping Cycle’ proposal

Nuclear thermal propulsion has been on NASA’s radar for more than 60 years.

This new proposal is part of NASA’s long history of considering nuclear propulsion for spacecraft. Gosse’s Bimodal NTP/NEP with a Wave Rotor Topping Cycle proposal was awarded an initial $12,500 to research and develop technology.

The new technology combines two of the key pillars of nuclear propulsion. Nuclear-Thermal Propulsion (NTP), employs a powerful combination – converting liquid hydrogen propellant heated by an onboard reactor into plasma and then expelling it through nozzles for thrust. While Nuclear-Electric Propulsion (NEP) is a cutting-edge, efficient form of propulsion that harnesses nuclear power to generate thrust. The reactor powers an ion engine using electricity, producing an electromagnetic field that charges inert gas particles and propels them forward as powerful jets for extraordinary bursts of speed!

The design uses solid-core NERVA reactors providing an ISP of 900 seconds, twice as efficient as existing chemical rockets! ISP (specific impulse) is a measure of the efficiency of a propulsion system. It is defined as the amount of thrust produced per unit of propellant consumed and is typically measured in seconds. The higher the specific impulse, the more efficient the propulsion system is and the more thrust it can produce per unit of propellant.

Even more excitingly, by introducing Wave Rotor technology this already startling achievement can be pushed even further – up to a potential 1400 – 2000 second specific impulse depending on the configuration.

Build it right and not only do you reach heights beyond imagination; but also make space exploration faster than ever before. Existing tech means a crewed voyage to Mars might take about six to nine months to reach Mars but this new technology would bring that travel time to about 45 days and mean Mars missions could last months instead of years.

However, that doesn’t mean there isn’t a good reason to be hopeful for the future of space travel. These types of technologies will – eventually – completely transform how we access the stars. 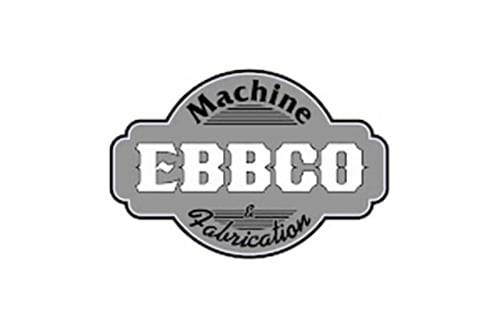 Ebbco is a YouTube channel that provides educational content related to fabrication and machine engineering. The channel shares...