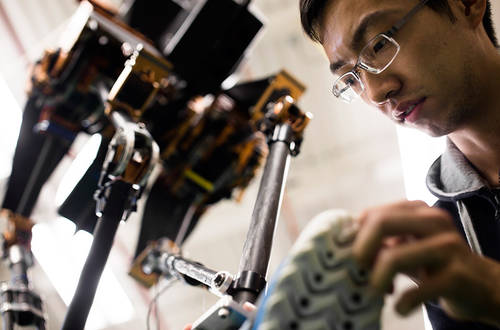 The University of Michigan’s MARLO, a free-standing two-legged robot, has taken the next step forward in conquering different ranges of terrain by switching between a range of walking algorithms on the fly. By quickly switching between various gait libraries MARLO is able to respond to uneven terrain without having to rely on a single strategy.

This will allow her to walk on rough or unstable ground, down steep slopes, or even through layers of snow.

Jessy Grizzle, the Universities Elmer G. Gilbert Distinguished University Professor of Engineering explained how it MARLO works. “The robot has no feeling in her tiny feet, but she senses the angles of her joints— for instance, her knee angles, hip angles and the rotation angle of her torso.”

Previously the team had worked to develop MABEL, which required a boom to remain stable. MABELs leading control algorithms meant she was only able to move in two dimensions.

MARLOs new control algorithms, however, allow movement across three dimensions. This means that MARLO is capable of real “3D walking”, meaning he can walk, and fall, in any direction.

The team were able to achieve this by combining two 2D algorithms. One set of controls can handle forward and backwards motion, whilst the other can handle MARLOs side-to-side balance

Xingye (Dennis) Da believes this technique “could help many researchers speed up the process of achieving stable walking on their robots.”

Da was able to create a library of 15 gaits, optimised for energy efficiency, to handle different walking speeds and ground heights. This means that as the robot passes over various types of terrain, its movement remains a natural as possible.

As MARLO can sense changes in ground height, she can to adjust her gait according to her speed and the surrounding terrain. If an exact match does not exist in the library, she can blend gaits together to fit the environment.

So far MARLO has been able to walk through snow, across randomly scattered plywood obstacles and down steep slopes.

There are of course limitations. Currently, MARLO cannot make quick turns or sudden sideways movements. The next step will be to merge the two algorithms further to improve agility.

Brent Griffin, the doctoral student who will be developing a fully 3D controller for MARLO, pointed out that “because the [algorithms] works without any robot-specific modifications, it is generalizable to other walking robots.”

The real purpose of MARLO, Jessy Grizzle has said, is to allow the creation of a general “recipe for legged locomotion.” Already the code that allows MARLO to walk across flat ground has been shared with other institutions working on different types of robots.

The University of Texas has already adapted the algorithm to control a prosthetic lower leg. Robert Gregg, an assistant professor of mechanical engineering and bioengineering at UoT explained that “the ability of MARLO to gracefully navigate uneven terrains is very exciting for my work in prosthetics. We hope to encode similar abilities into our robotic prosthetic leg so that lower-limb amputees can just as easily walk into the community without having to think about the terrain”.

Interested in more stories about Robotics. Explore our past Robotics stories. Strathclyde University is leading a research project to develop groundbreaking technology to help clean up space junk. The...