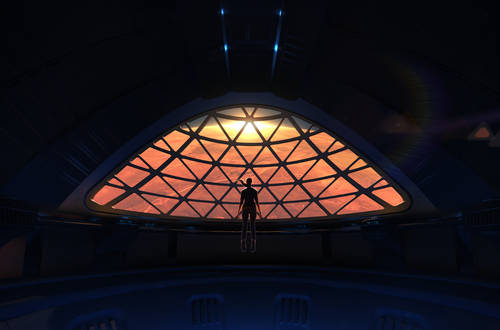 Elon Musk used the 67th International Astronautical Congress (IAC) in Guadalajara, Mexico, to go into details about SpaceX’s ambitious plan to colonise Mars in the next decade.

Using reusable boosters, SpaceX would ferry future interplanetary explorers up into orbit and refuel the craft in space, before allowing them to set off on their journey to Mars. In interplanetary transit, the craft would rely on solar panels to provide electricity. Once the ship arrives, it would land and be refuelled using factories set up on Mars which can extract and create rocket fuel from ice-water, and carbon dioxide in the atmosphere.

Elon Musk also slipped into the speech that he would like to name the first spacecraft that goes to Mars, The Heart of Gold (the name of the starship in Douglas Adams’ The Hitchhiker’s Guide to the Galaxy).

Elon Musk explained that he wanted to see the first elements of the system come into service by 2022 but he knew this goal was ambitious. The big question that remains is how the project would be funded – SpaceX wants to use profit from its satellite launches and contracts to restock the International Space Station to fund the project but will also need to seek private and public partnerships to make the scheme a reality.

You can download the presentation of the plan in full or view the talk in full.

The plan is big news for the industry but questions remain as to the plan’s feasibility. Here are some snippets of how the press covered the announcement

… he made little attempt to solve the thorny problem of the initial cost of constructing the system. Suggesting possible revenue streams, Musk proposed two sources of cash – sending cargo and astronauts to the International Space Station and launching satellites – both already part of SpaceX’s business model.

… Fewer than 5 percent of SpaceX’s personnel are working on the ITS at the moment, Musk said. And the company is currently spending just a few tens of millions of dollars on the project every year, which Musk estimated would ultimately require a company investment of about $10 billion. But that should change as SpaceX wraps up work on the final version of the Falcon 9 and its crewed Dragon capsule, which will carry astronauts to and from the International Space Station for NASA (and perhaps ferry folks to other destinations close to Earth), Musk said.

The reason why Mr Musk wants to go to Mars is, he said: “Without someone with a real ideological commitment, it didn’t seem we were on any trajectory to become a spacefaring civilisation.”

There’s a lot still to prove in terms of feasibility, not the least of which is sourcing all the money required to make this a reality. Musk outlines some potential sources, including, he joked (or was it serious?) Kickstarter. But Musk himself showed that he knows how unlikely all of this sounds.

Musk has been teasing details about this rocket for years, but up until now, the specifics of the vehicle have been mostly a mystery. Musk said that the simulation video shown off today is “quite close to what we will actually build,” and clarified that it’s “not an artist’s impression.” The simulation was made from SpaceX’s CAD (an engineering program) models, he said. Musk also held to his previously-stated, but admittedly loose, goal of sending humans to Mars in the mid-to-late 2020s.

At the press conference, though, he said that while he has already briefed NASA senior management about his plans, he did not necessarily expect agency funding to help develop it. “In the future, there may be a NASA contract, there may not be. I don’t know,” he said. “If there is, that’s a good thing. If there’s not, it’s obviously not a good thing.”
Musk, though, dismissed questions about the share of funding for the system coming from public or private sources as “pedestrian” compared to the bigger issues that are driving the development of the transport system. “There are larger issues at stake,” he said. “Are we going to be a multiplanetary species or not?”

How far to go? Well, SpaceX just did a successful test-fire of the Raptor engine, which has three times the propulsive power as the Merlins it uses on the Falcon 9. “I’m amazed it didn’t blow up on its first firing,” Musk says. The company’s engineers have also made progress on the carbon fiber fuel tanks. As any distance bicyclist will tell you (ad naseum), carbon fiber has amazing strength to weight ratio (just don’t put it in a clamp!). But making a mold big enough, without cracks, and having it cure at the right temperature is an enormously difficult challenge. Musk says he hopes to have the first developmental spaceship ready to operate in about three years. If things go super well, the one could be ready to depart in about 10 years.

Read more of our stories about the Interplanetary Transport System 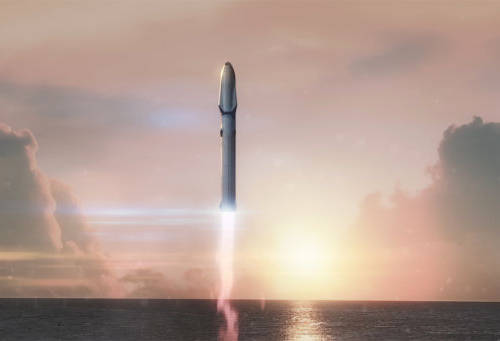