A new study by mechanical engineers at UC Berkeley finally shows why your shoelaces may keep coming untied.

It’s a question that everyone asks (often after stopping to retie their shoes) yet one that nobody had investigated until now.

According to Engineers at Berkeley the answer is that a double whammy of stomping and whipping forces acts like an invisible hand, loosening the knot and then tugging on the free ends of your laces until the whole thing unravels. 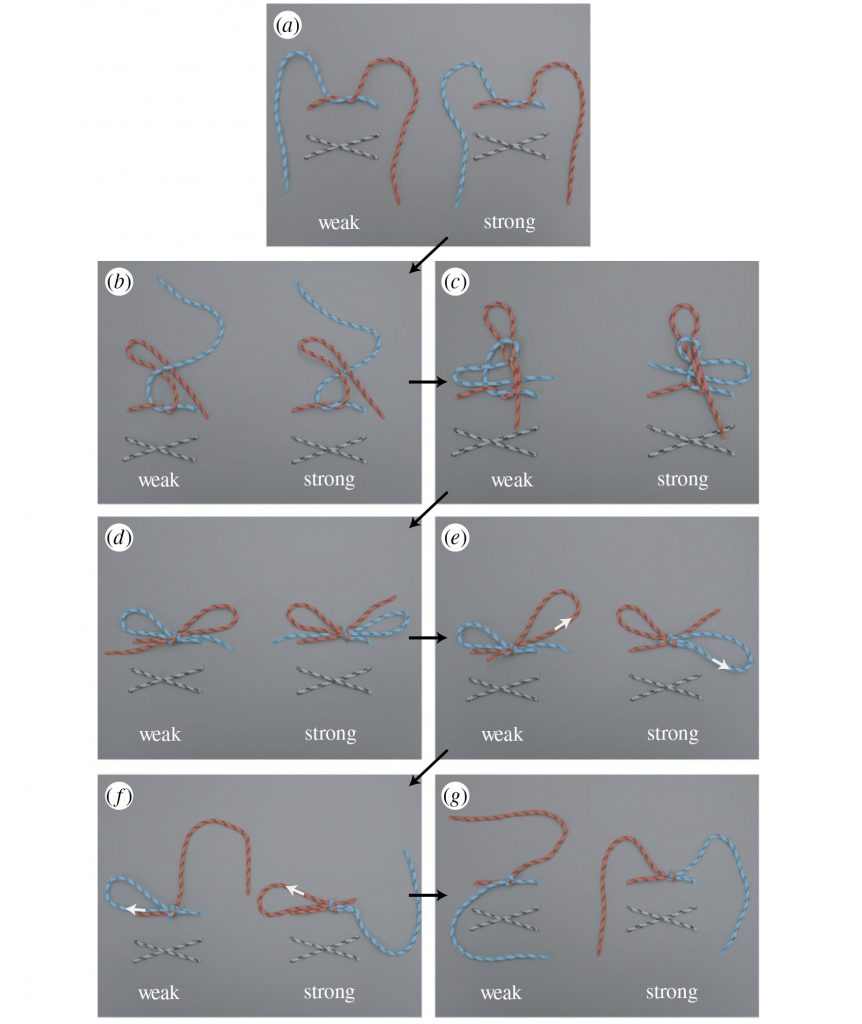 An overhead view of how to tie the weak knot (left) and the strong knot (right). The two knots only differ in the relative tying off the second trefoil to the first trefoil (panels b and c). After the loops are pulled out (indicated by the white arrows), the weak and strong knots become the prototypical false and square knots.

The study is more than an example of Engineering answering a seemingly obvious question though. A better understanding of knot mechanics is required for sharper insight into how knotted structures fail under a variety of forces.

The team used a slow-motion camera and a series of experiments, the study shows that shoelace knot failure happens in a matter of seconds, triggered by a complex interaction of forces

When you talk about knotted structures, if you can start to understand the shoelace, then you can apply it to other things, like DNA or microstructures, that fail under dynamic forces […] This is the first step toward understanding why certain knots are better than others, which no one has really done.”Christopher Daily-Diamond, study co-author and a graduate student at Berkeley

How to stop your shoelaces from untying

How to solve the issue yourself? The team believe that the secret to shoelaces not becoming untied is tightly tied laces.

A tight lace requires more cycles of impact and leg swinging to cause knot failure than one might experience in a day’s worth of walking or running.

Of course, more research is needed to tease apart all the variables involved in the process but the study does offer an answer to the annoying question of why your laces seem fine one minute and then come untied the next.

The study was published in the journal Proceedings of the Royal Society A. Good news for the iconic London Taxi Company. It has just opened a brand new production plant outside...

A new form of matter called “Excitonium” has been confirmed by a team of scientists working at the University of...