On Feb. 18, 2021 – as NASA’s Mars Perseverance rover made its final descent to the Red Planet – the six-wheeled robot’s beamed a steady stream of data back to NASA

Amongst the touch-down telemetry was a series of jaw-dropping hi-res image captured as the rover’s jetpack lowered it to the ground.

This high-resolution image was part of a video taken by several cameras as NASA’s Perseverance rover touched down.

Here descent stage holding NASA’s Perseverance rover can be seen falling through the Martian atmosphere, its parachute trailing behind.

This amazing image was taken by the High-Resolution Imaging Experiment (HiRISE) camera aboard the Mars Reconnaissance Orbiter.

The ancient river delta, which is the target of the Perseverance mission, can be seen entering Jezero Crater from the left. One of the six wheels aboard NASA’s Perseverance Mars rover. The image was taken by one of Perseverance’s colour Hazard Cameras

This is the first high-resolution, colour image to be sent back by the Hazard Cameras (Hazcams) on the underside of NASA’s Perseverance Mars rover after landing.

A key objective for Perseverance’s mission on Mars is astrobiology, including the search for signs of ancient microbial life. The rover will characterize the planet’s geology and past climate, paving the way for human exploration of the Red Planet, and be the first mission to collect and cache Martian rock and regolith (broken rock and dust).

Future NASA missions, in cooperation with ESA (the European Space Agency), will send spacecraft to Mars to collect these cached samples from the surface and return them to Earth for in-depth analysis. 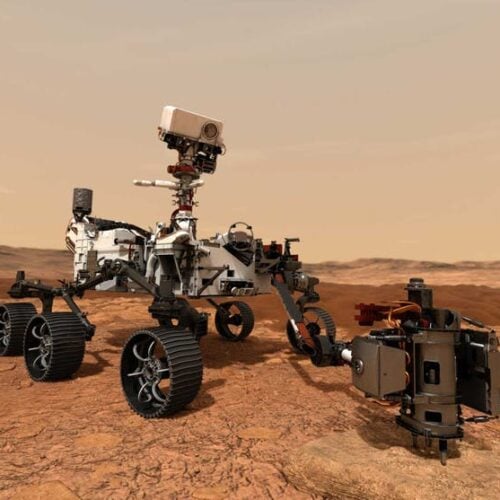 Perseverance Mars rover: how to prove whether there’s life on the red planet

We’ll soon be able to properly start asking the question: “Are we alone in the universe?” Nasa’s next...