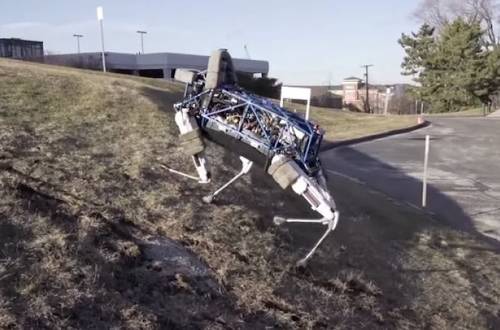 Boston Dynamics, a company specializing in animal-like robots, has just released their latest design: Spot. Spot is an untethered dog-like robot that is designed to be sturdy and sure-footed when carrying supplies over uneven terrain. The project was funded by the Defense Advanced Research Projects Agency (DARPA), and was meant to assist indangerous situations, such as search and rescue or accessing disaster zones.

Spot is much smaller than the BigDog model previously released by the company in 2008. Instead of a 109 kilogram (240 pound) behemoth that tops out at traveling 6.4 kilometers per hour (4 miles per hour), Spot is much leaner at 73 kilograms (160 pounds) and though its official top speed has not been announced, it easily outpaces its older sibling while climbing up a hill.

Spot cannot carry as much weight as BigDog, but it isn’t really meant to. While BigDog was designed to haul up to 155 kilograms (340 pounds) of equipment, Spot was meant to be more dextrous and deft. Spot is better able to navigate difficult areas both inside and outside more quickly and easily than BigDog.

The electronically-powered robot is meant to have the rough appearance and gait of a dog (it prances quite a bit more than a dog typically does, but I digress), but one striking difference in its silhouette is the head. Rather than having visual sensors on a head-like structure, Spot is able to see the environment with a rotating sensor on its back, situated between the front two hydraulically-powered legs.

As you’ll see in the video, the robot can’t be kicked over. Even on an icy, slippery parking lot, Spot scrambles to remain on its feet after being shoved. This is actually more important of a feature than it might immediately seem. It’s hard not to anthropomorphize a bit and feel bad for the robot, who almost seems a bit dejected after recovering from a hit, but it demonstrates how well Spot is able to remain upright when traversing hostile territory.

Check out Spot in action here:

Spot is just the latest in a long line of incredibly cool robots to come out of Boston Dynamics. 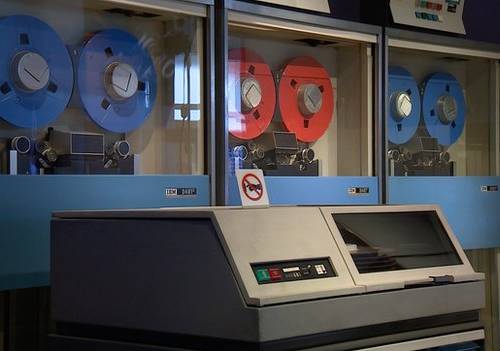 Vint Cerf, a "father of the internet", says he is worried that all the images and documents we...