The Earth’s Core is growing more on one side than the other – why is the planet not tipping? Home » News » Energy & Environment » The Earth’s Core is growing more on one side than the other – why is the planet not tipping?

More than 5,000 kilometres beneath us, Earth’s solid metal inner core wasn’t discovered until 1936. Almost a century later, we’re still struggling to answer basic questions about when and how it first formed.

These aren’t easy puzzles to solve. We can’t directly sample the inner core, so the key to unravelling its mysteries lies in collaboration between seismologists, who indirectly sample it with seismic waves, geodynamicists, who create models of its dynamics, and mineral physicists, who study the behaviour of iron alloys at high pressures and temperatures. 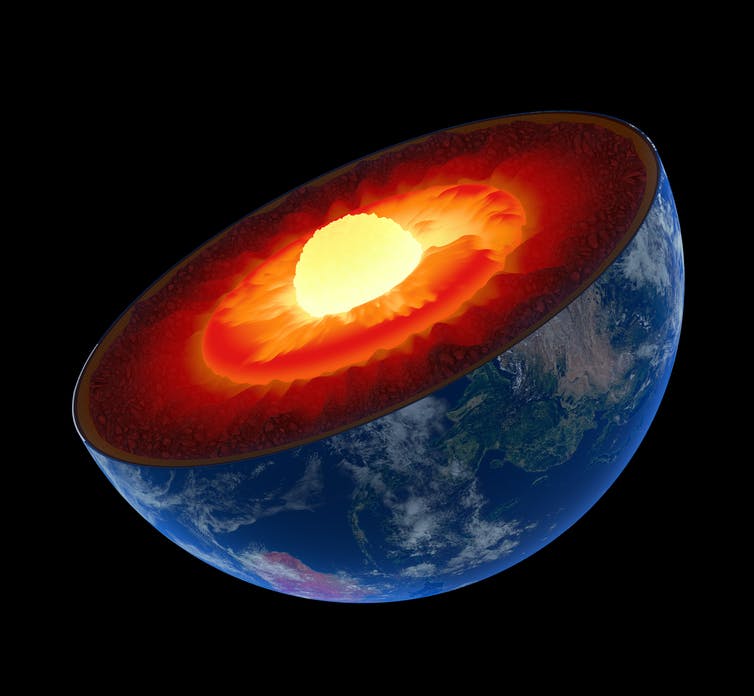 Combining these disciplines, scientists have delivered an important clue about what’s happening miles beneath our feet. In a new study, they reveal how Earth’s inner core is growing faster on one side than the other, which could help explain how old the inner core is, and the intriguing history of Earth’s magnetic field.

Earth’s core was formed very early in our planet’s 4.5 billion-year history, within the first 200 million years. Gravity pulled the heavier iron to the centre of the young planet, leaving the rocky, silicate minerals to make up the mantle and crust.

Earth’s formation captured a lot of heat within the planet. The loss of this heat, and heating by ongoing radioactive decay, have since driven our planet’s evolution. Heat loss in Earth’s interior drives the vigorous flow in the liquid iron outer core, which creates Earth’s magnetic field. Meanwhile, cooling within Earth’s deep interior helps power plate tectonics, which shape the surface of our planet.

As Earth cooled over time, the temperature at the centre of the planet eventually dropped below the melting point of iron at extreme pressures, and the inner core started to crystallise. Today, the inner core continues to grow at roughly 1mm in radius each year, which equates to the solidification of 8,000 tonnes of molten iron every second. In billions of years, this cooling will eventually lead to the whole core becoming solid, leaving Earth without its protective magnetic field.

One might assume that this solidification creates a homogeneous solid sphere, but this isn’t the case. In the 1990s, scientists realised that the speed of seismic waves travelling through the inner core varied unexpectedly. This suggested that something asymmetrical was happening in the inner core.

The new study probed this mystery, using new seismic observations combined with geodynamic modelling and estimates of how iron alloys behave at high pressure. They found that the eastern inner core located beneath Indonesia’s Banda Sea is growing faster than the western side beneath Brazil.

You can think of this uneven growth as like trying to make ice cream in a freezer that’s only working on one side: ice crystals form only on the side of the ice cream where the cooling is effective. On the Earth, the uneven growth is caused by the rest of the planet sucking heat more quickly from some parts of the inner core than others.

But unlike the ice cream, the solid inner core is subject to gravitational forces which distribute the new growth evenly through a process of creeping interior flow, which maintains the inner core’s spherical shape. This means that Earth is in no danger of tipping, though this uneven growth does get recorded in the seismic wave speeds in our planet’s inner core.

So does this approach help us understand how old the inner core might be? When the researchers matched their seismic observations with their flow models, they found that it’s likely that the inner core – at the centre of the entire core which formed much earlier – is between 500 million and 1,500 million years old.

The study reports that the younger end of this age range is the better match, although the older end matches an estimate made by measuring changes in the strength of Earth’s magnetic field. Whichever number turns out to be correct, it’s clear that the inner core is a relative youngster, somewhere between a ninth and a third as old as Earth itself.

This new work presents a powerful new model of the inner core. However, a number of physical assumptions the authors made would have to be true for this to be correct. For example, the model only works if the inner core consists of one specific crystalline phase of iron, about which there is some uncertainty.

And does our uneven inner core make the Earth unusual? It turns out that many planetary bodies have two halves which are somehow different to each other. On Mars, the surface of the northern half is lower-lying while the southern half is more mountainous. The Moon’s near-side crust is chemically different to the far-side one. On Mercury and Jupiter it’s not the surface that is uneven but the magnetic field, which doesn’t form a mirror image between north and south.

So while the causes for all of these asymmetries vary, Earth appears to be in good company as a slightly asymmetrical planet in a solar system of lopsided celestial bodies. 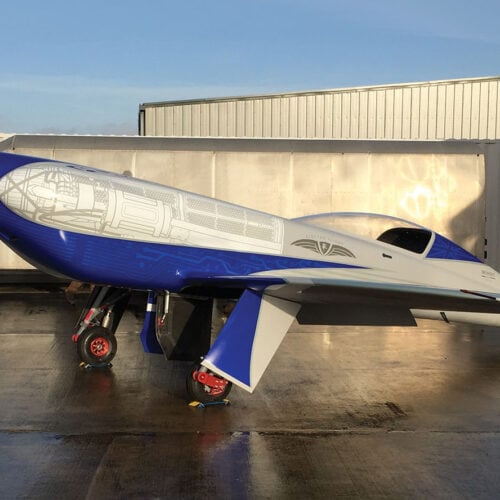 Electric NXT - aka E-NXT - is setting its sights on the world speed record for an electric...