In touch with reality 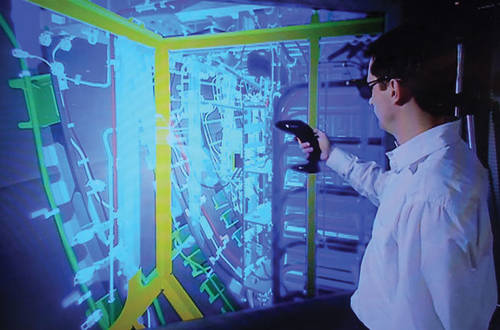 Manufacturing is changing. The advent of new ways to design things and build them is having an effect not only on the products that factories make but also on the factories themselves, and engineers are increasingly using tools such as virtual reality (VR) to put themselves in the middle of manufacturing processes to work out how humans and machines can work together to make new generations of products.

This is combining with the increasing use of technologies such as additive systems to bring new machinery and tools into the manufacturing sector to create a ‘factory of the future’ that will bear little resemblance even to the highly automated production plants of today.

At the forefront of this change is Lockheed Martin, which is employing a strategy it calls ‘Digital Tapestry’ to incorporate new digital design and manufacture technologies.

Dennis Little, Lockheed Martin’s vice-president for production, explains how the company uses a system it refers to as ‘virtual pathfinding’ to streamline its manufacturing processes to cut the time it takes to build products — notably in its space systems business — and thereby cut costs. This is used as part of a framework called model-based engineering (MBE), which maintains digital data throughout the design and production process, from CAD files through to production. Virtual pathfinding is carried out at the Collaborative Human Immersive Laboratory (CHIL), in Colorado.

CHIL uses technology directly inspired by video gaming and special-effects work, notably motion capture, to enable engineers to build components or carry out maintenance tasks in the virtual world to identify and eliminate the bottlenecks in the process; for example, bolts can be tightened without other parts of the assembly blocking the path of the wrench. Initially used to design GPS satellites for the US Air Force, CHIL is also lined up to help Lockheed Martin design the manufacturing facilities for the Orion crewed space capsule for NASA and for other projects. The goal, Little said, is for all products to be built virtually before the physical factories are built, to prevent having to go back and redesign systems that didn’t work the first time around.

Lockheed Martin is also looking at new ways of deploying additive manufacturing technologies. Installing extrusion heads onto six-axis robot arms and connecting them to mixers and blenders allows the company to use a technique called pointwise composition control to change the properties of the printed material ‘on the fly’ within the structure of the part as it is printed; this, for example, might allow the rigid spars, flexible skin and solvent-resistant fuel tanks of the wing structure of a small unmanned aerial vehicle (UAV) to be printed in a single shot, rather than made as individual components and assembled, saving time and producing a stronger structure.

In the more commercial aerospace world, Airbus is using a technology known as MiRA, or Mixed Reality Application, where engineers installing equipment inside aircraft fuselages use a tablet computer and a sensor pack, which tracks their position and relates it to a Realistic Human Ergonomics Analysis (RHEA) tool, a full-scale 3D digital model of the aircraft they are working on. This enables them to, for example, call up an image of a bracket installation in the area where they are working to ensure that they have fixed it correctly. Geolocation devices attached to the aircraft interact with the sensor pack to allow them to view their work location from any angle. The RHEA is updated as each component is installed. This technique has helped reduce the time to inspect the 80,000 brackets inside an A380 fuselage, which hold systems such as hydraulics pipes, from three weeks to three days.

Another example of this is used in wiring systems from Airbus helicopters. Wiring harnesses are assembled flat on a system called a jigboard, which holds cabling in place so that the necessary components for the electrical systems can be assembled and connected in the right place and in the right order; the entire harness can then be removed from the jigboard and installed in the aircraft. This is a complicated procedure that used to be achieved by printing out a prototype arrangement and following that. But now, a digital version of the jigboard is projected onto a screen and engineers use a tablet computer to help them navigate the route that wiring has to take.

Another projection system is reducing the time it takes to paint camouflage patterns onto Tiger and NH90 helicopters. This uses lasers to project the outlines of the pattern’s colour blocks directly on the fuselage, so that painters can fill in the colours; this speeds up the process, compared with the traditional technique of hand painting the outlines then filling them in.

Among Airbus’s digital manufacturing tools is a VR suite from Manchester-based Virtalis at its site in Broughton, which is connected to a haptics system to help engineers navigate potential tool clashes. This system was used to design the manufacturing process for the A350 wing, which is built in a horizontal configuration rather than the more common vertical configuration.

Meanwhile, in the automotive sector, Jaguar Land Rover (JLR) is joining the aerospace sector in using VR technology to design its production processes.

The use of VR is becoming more common in the automotive sector, with several companies — particularly at the high end of the industry — using the technology to give prospective customers a taste of the vehicle layout and look. But with its Ergonomics Lab at its facility in Gaydon, JLR is taking this to another level, using VR in a similar way to the aerospace sector, with a VR suite incorporating Sony 4K high-resolution screens. Almost half of the time on the VR suite is used for vehicle package engineering, such as fine-tuning the cabin ergonomics, improving vision from the driving seat of the instruments and ensuring that the vehicle frame doesn’t obscure the driver’s vision in dangerous ways. Other areas where it is used include crash simulation and aerodynamics and in designing the assembly process.

VR helps Jaguar Land Rover design its products, and how to build them

‘The tools for high-end VR are pretty much common across all the sectors that use them,’ said VR manager Brian Waterfield. ‘You aren’t going to find much difference between our kit and the type of setup used in aerospace.’ The design of Range Rover Evoque depended heavily on VR, he added. ‘It was a real challenge. Being a much more constrained design than we had done previously, we had to work out how everything fitted together very carefully.’

VR gives engineers a much more intuitive view of simulation, Waterfield said. ‘As we’re moving towards more and more simulation, it becomes more important to us.’ Using the VR system to plan out changes to the manufacturing track allows potential safety, productivity and maintenance problems to be detected, visualised and solved before equipment is installed and even, in some cases, before it is ordered. For example, some manufacturing jigs have protusions on their upper surfaces that can cause problems when installing car roofs and have, in the past, required repositioning or changing tools — this is not the case any more.

The package also allows such things as the effect of the position of lighting on work spaces to be evaluated. ‘Normally we start a project with ergonomics specialists working in the VR rig, but as we progress we will have engineers off the track come in and try it out,’ Waterfield said.

The next stage of development for JLR’s VR system is likely to be increasing the incorporation of haptics, Waterfield said. ‘We can do quite a lot with haptics now, but we aren’t quite there with all the things we’d like to be able to do to fully simulate the manufacturing environment,’ he said. Research in this area is ongoing. 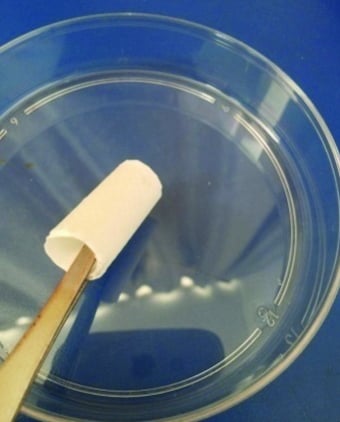 Micro imprinting and electrospinning techniques have been employed to develop a vascular graft composed of three layers for...