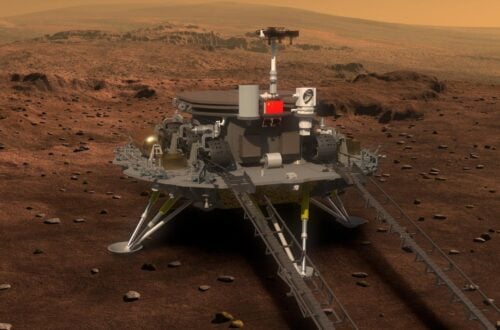 The Chinese Mars lander: how Zhurong will attempt to touch down on the red planet

For the first few months of 2021, the Martian atmosphere was buzzing with new visitors from Earth. First, it was the UAE Space Agency’s Hope probe, followed by the Chinese Tianwen-1 entering orbit.

More recently Nasa landed the biggest-ever rover on Mars and its companion, an ingenious helicopter, both of which have been setting new milestones since. 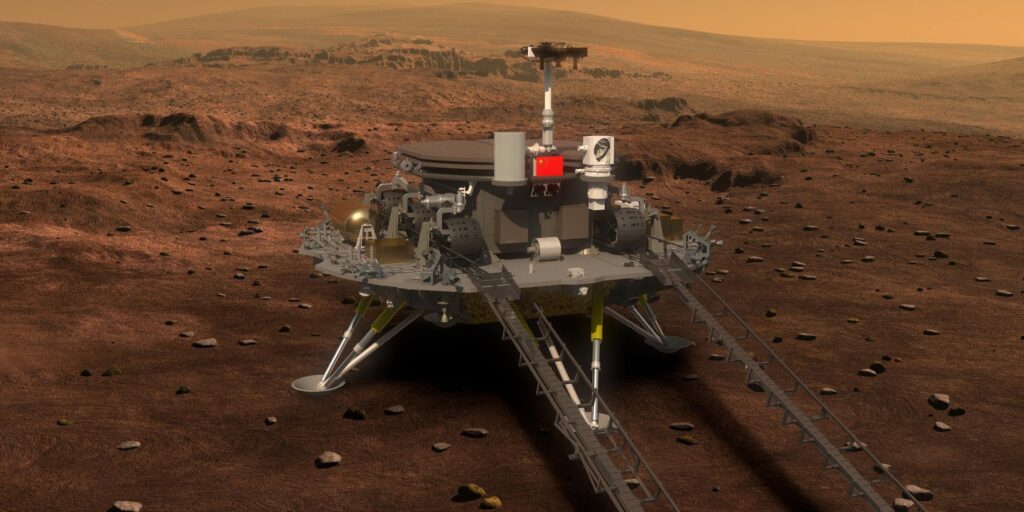 The next visitor to the planet will be Tianwen-1 mission’s lander, which will attempt to reach the surface of the Mars in mid-May. To enter the Martian atmosphere, it will use a slightly different technique to previous missions.

Landing on Mars is notoriously dangerous – more missions have failed than succeeded. A successful Mars landing requires entering the atmosphere at very high speeds, then slowing the spacecraft down just the right way as it approaches its landing location.

This phase of the mission, known as entry-descent-landing, is the most critical. Previous missions have used several different ways of Martian atmospheric entry.

Perfecting entry to Mars’s atmosphere has been helped by the experience of returning spacecraft to Earth. Earth may have a significantly different atmosphere to Mars, but the principles remain the same.

A spacecraft orbiting a planet will be moving very fast, to keep itself bound to that orbit. But if the spacecraft entered an atmosphere at such high speed, even one as thin as Mars’s, it would burn up. Anything entering the atmosphere needs to be slowed down significantly and to get rid of the heat generated during this brief journey. There are several ways to go about it.

Spacecraft are protected from the heat generated during atmospheric entry using heat shields. Various missions in the past have used techniques such as absorbing heat, an insulating coating, reflecting the heat back into atmosphere or by ablation – burning up the shield material.

From Apollo missions of 1960s to the more recent SpaceX’s Dragon, these techniques have been used successfully, and they work really well for Earth. But when it comes to Mars, engineers need to employ some additional measures.

Orbiters are designed to monitor a planet’s surface from the orbit and act as a communications relay station. When approaching a planet, the spacecraft is usually directed along successively smaller elliptical orbits, slowing down each time, until it reaches its target orbit. This technique can also be used to lower the orbit of a spacecraft ahead of a lander’s atmospheric entry.

The entire manoeuvre occurs over a few months and doesn’t need any additional equipment – an efficient way to conserve fuel. Since it uses the planet’s upper atmosphere to apply brakes, it’s called as aerobraking. Aerobraking has been used for various Mars missions including ExoMars Trace Gas Orbiter and the Mars Reconnaissance Orbiter.

Aerobraking can significantly slow down the spacecraft, but for missions with rovers to land it gets more complicated. On Mars, the atmospheric density is just 1% of Earth and there are no oceans for the spacecraft to safely splash into. The blunt shape of the spacecraft alone is not enough to reduce the speed.

Previously, successful missions have used extra measures. Mars Pathfinder spacecraft used parachutes to decelerate, while relying on a unique airbag system that sprung into action in the final few seconds to absorb the landing shock. The Spirit and Opportunity rovers landed successfully on Mars with the same technique.

A few years later, Curiosity rover used a new landing system. In the final few seconds, rockets were fired, allowing the spacecraft to hover while a tether – a skycrane – lowered the rover to the dusty Martian surface. This new system demonstrated delivery of a heavy payload to Mars and paved the way for bigger missions.

More recently, the Perseverance rover which landed in early 2021, used the the reliable skycrane as well as two more advanced technologies. These new features which used live images taken from its cameras enabled a more accurate, reliable and safer landing.

The Chinese Tianwen-1 rover landing is the next Mars mission. The ambitious mission has orbiting, landing and roving components – the first mission to include all three on its first attempt. It has already been circling the red planet since it entered Mars’s orbit on February 24 and will attempt to land its rover Zhurong – which means “fire god” – in mid May.

In size, Zhurong falls between Spirit and the Perseverence and it is carrying six pieces of scientific equipment. After landing, Zhurong will survey the surroundings to study Martian soil, geomorphology and atmosphere, and will look for signs of subsurface water ice.

Traditionally, the Chinese authorities don’t reveal a lot of information before the event. However, based on an early overview of the mission by some Chinese researchers, we know the landing sequence the spacecraft will attempt to follow.

On May 17, Zhurong – protected by an aeroshell (a protective shell surrounding the spacecraft which includes the heat shield) – will enter the atmosphere at a speed of 4 km/s. When it slows down enough, parachutes will be deployed. In the last phase of the sequence, rockets with variable thrust engines will be used for further deceleration.

In contrast with its American counterpart, Tianwen-1 will employ two reliable technologies – a laser range finder to work out where it is relative to Martian terrain and a microwave sensor to determine its speed more accurately. These will be used for navigational correction during its parachuted descent phase. During the powered descent phase at the end, optical and Lidar imaging will assist in hazard detection.

Just before touchdown, an automated obstacle avoidance sequence will begin for soft landing. If the mission is successful, China will be the first country to land a rover on Mars in its first attempt. A few days after that, Zhurong will be ready to explore the surface.

Written by Deep Bandivadekar, PhD candidate, University of Strathclyde and republished from The Conversation under a Creative Commons license.

Handwashing clothes sounds like an easy task but for 70% of the world’s population who lack access to...