NASA believes that a radio telescope on the far side of the Moon might be perfect for alien hunting.

NASA has announced it is funding research for a giant radio telescope which would be placed in a crater on the far side of the Moon.

The idea, lead by the NASA Innovative Advanced Concepts (NIAC) Program, has scooped a Phase 1 grant from NASA to develop the Lunar Crater Radio Telescope (LCRT).

NIAC already has a reputation for a radically futuristic and outer-worldly concept, but they hope this concept might be a major turning point in the search for extraterrestrial intelligence.

Turning the farside of the moon into a radio astronomy preserve could also be a huge win for SETI as the proliferation of LEO satellites stomps on our ability to detect faint radio signals from extraterrestrial intelligence on Earth:https://t.co/1zhRhmO8EO

The project is spearheaded by Saptarshi Bandyopadhyay, a robotics technologist at NASA’s Jet Propulsion Laboratory and aims to capitalise on the “tremendous advantages compared to Earth-based and Earth-orbiting telescopes” on the far side of the Moon.

By positioning the telescope there researchers would be able to observe the universe at much greater wavelengths than are normally reflected by Earth’s atmosphere.

This would mean that scientists would be able to receive wavelengths greater-than-10-meter long – a spectrum that existing telescopes on Earth have yet to probe. These long wavelengths “could enable tremendous scientific discoveries in the field of cosmology,” according to Bandyopadhyay and allow to, possibly, eavesdrop on ancient alien civilisations communications.

How would it work

The design would be based on a wire-mesh one kilometre in diameter. This could be deployed by wall-climbing robots inside a suitable large lunar crater. Essentially NASA is planning to cast a spiderweb-like mesh over an existing crater on the far side of the Moon which would allow them quickly and easily create a gigantic radio telescope.

The big advantage of placing a device on the Moon, though, is the Moon itself would “act as a physical shield that isolates the lunar-surface telescope from radio interferences/noises from Earth-based sources… during the lunar night.”

If the plan succeeded the LCRT would be the largest filled-aperture radio telescope in the Solar System. 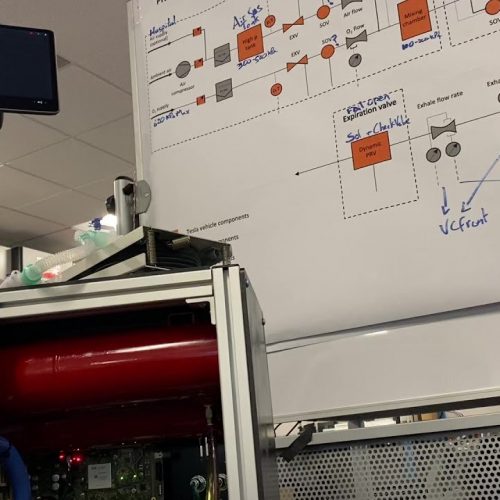 Tesla has unveiled its latest Prototype Ventilator which is made from Model 3 parts. https://www.youtube.com/watch?v=zZbDg24dfN0&feature=emb_title US Electric car...