National Skyscraper Day is coming up on September 3rd. Skyscraper construction and design have remained largely unchanged over the last century, several aspects of construction are due for radical changes to increase efficiency, improve sustainability and create greener alternatives.

The number of buildings over 200 meters has tripled since the year 2000, motivating engineers to reduce the environmental impact of skyscrapers.

This infographic was created by the New Jersey Institute of Technology’s Masters in Civil Engineering degree program.

The three tallest buildings in the world are the Burj Khalifa in Dubai, the Shanghai Tower in mainland China, and the Makkah Royal Clock Tower in Mecca. They stand as symbols of economic prosperity in their respective cities. The Burj Khalifa is so high that its highest point is 2,717 feet above the ground. This is as tall as some mountains, allowing it to touch the clouds. These structures dominate the cityscape and can be seen from miles away. Those who want to make a strong statement will find no better way to do it.

The number of buildings that exceed 200 meters or 656 feet in height has tripled since the year 2000. It seems like everyone wants to touch the sky. There were only a few of these in the past because of the enormous costs and the difficulty of construction. Perhaps the high cost of real estate has encouraged people to build higher. In fact, there has been a 50% increase in the global tally in the past four years. There were just 615 skyscrapers in 2010 but this constantly rose until it reached 935 by 2014.

It is estimated that 5% of man-made carbon dioxide emissions worldwide come from the production and transportation of cement, a vital ingredient for concrete. A further 5% of emissions can be traced to steel production. For every ton of steel produced, 2 tons of carbon dioxide gets emitted. This results in the annual release of approximately 3 billion tons of the greenhouse gas. Experts say that the carbon embodied in building materials will make up 45% of a typical modern office black’s carbon footprint. There is a definite need to reduce this high percentage to lessen the industry’s contribution to environmental problems.

A lone elevator with traditional steel rope carrying twenty-four passengers consumes 130,000 KWh of energy per year and weighs up to 27,000 kilograms. The ropes are subjected to severe strains. On windy days, the entire building may shake and put steel-cabled elevators temporarily out of service. The traditional elevator design is simply inefficient. People have to wait for a long time just to be able to ride them. In a 2010 study, it was found that New York City office workers spent a total of 16.6 years waiting for elevators to open up and let them ride.

The Search for Better Materials

Companies are using glass with greater frequency to design the shape of skyscrapers. Glass has the advantage of lightness, visual appeal, and translucence. Insulating capacity has also been improved thanks to various coatings and construction methods. Many are also working to build sustainable and green-friendly wooden skyscrapers. They are using cross-laminated timber or CLT which has excellent strength and durability. It is highly resistant to fire, moisture and decay.

In order to solve elevator problems, some companies are working on ropeless elevators that can move vertically and horizontally. These use magnets and linear motor technology. These ropeless elevators need smaller shafts than conventional ones. With the old design, up to 40% of the space is devoted to the elevators. The actual percentage will depend on the total height. Going ropeless can increase the building’s usable area by as much as 25%. This is a significant increase that will allow more staff to be placed per floor. The productivity of the structure will rise because of this simple change.

This new type of elevator is going to be made from carbon composite materials which are known to be strong yet lightweight. The cabins and doors weigh about 300 kg in standard units. The switch to lighter materials will bring this down to just 50 kg or about one-sixth of the original. Other parts will stay as is, but the overall result is still a 50% weight reduction over the current models. Lighter objects are always easier to lift up. The energy consumption of these elevators will drop as the motors will not have to work as hard as before.

The shaft transport capacity can also increase by almost 50%. This means that elevators will be able to fit in twice as more people per trip. Waiting lines will be minimized and workers will be able to get to their offices quickly. With less trips required, the carbon footprint may also decrease by half.

Steel has traditionally been the main component of major construction projects. In 2014, however, only 5% of the skyscrapers completed followed this old model. The majority depended on cross-laminated timber construction or CLT. That’s 52 out of 97 buildings or 54%. It’s a significant increase to the 2013 figures, which showed that 24 out of 71 buildings or effectively one-third. CLT is composed of several layers of timber board that are bonded to form structural sheets as thick as 40 centimeters. This cross-lamination technique is what provides incredible strength and stability to the material.

For every cubic meter of concrete or blocks replaced with wood, the building’s carbon dioxide emissions decrease by up to 1.1 tons. Many advocate a hybrid system wherein timber and concrete beams are both used whenever appropriate. Carbon footprint reduction can reach as high as 75% in this type of system when compared to the usual all-concrete structure. Wood is able to store CO2. For instance, there is a proposed skyscraper in Paris called the Baobab. It would be able to store about 3,700 tons of carbon dioxide, the equivalent of taking 2,207 vehicles off the road for an entire year.

Wood is also a capable thermal insulator. It can resist the transfer of heat 400 times better than steel and 10 times better than concrete. This means less of the material is needed to line the walls and enclose the building. Thinner walls also provide the benefit of increased usable space. 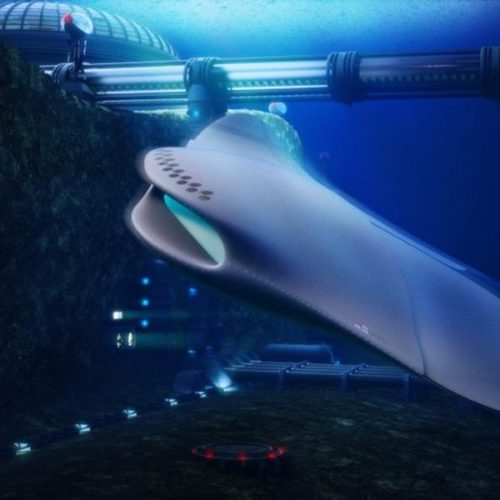 The Royal Navy has released new submarine concepts that hint at how 3D printing could revolutionise naval design....

This infographic was created by the New Jersey Institute of Technology’s Masters in Civil Engineering degree program.

What Does a Structural Engineer Know That Other Engineers Do Not Know?

It is well-known that engineering has many branches leading to the emergence of different types of engineers. There are civil,...

Engineerings history has been marked by influential megaprojects. From ancient structures like the Pyramids and Great Wall to modern marvels...